All Collections
What is Carv?
What does Carv measure and what are the metrics?

What does Carv measure and what are the metrics?

Written by Jamie Salter
Updated over a week ago 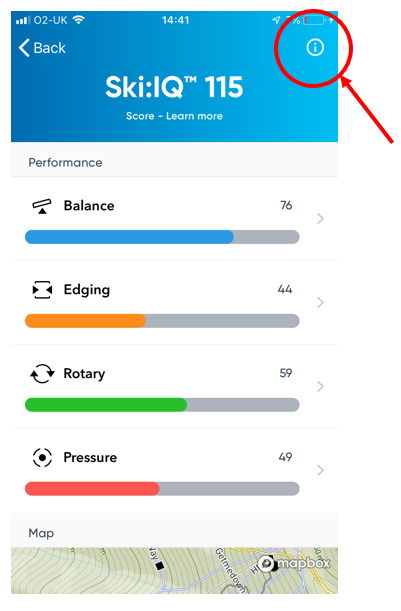 Balance refers to your forward / back and lateral position. To keep a well balanced position, bend your knees, keep your hips centered and over the feet and visualise keeping your nose over your toes.

How far forward (or back) you are in your boots.  A low value means you are leaning too far back. This is a very common problem and will reduce the pressure on the front edges of your ski, reducing control. It will also move your centre of balance away from centre, which will make you more unstable over bumps and ice.  To increase this metric, move your weight forward until you can feel pressure under the ball of you foot and 'attack' the slope!

Edging movements adjust the edge angle of the skis in relation to the snow which causes the skis to slip, skid or carve. Good edging involves inclination of your legs while maintaining balance over the ski.

The amount you tilt your skis at a similar angle on every turn.  This metric compares the angle of each of your skis within the turn.  Tilting the outer ski more than the inner ski is called 'A-framing' and is a common problem for intermediate skiers.  This causes both skis to turn with a different radius and can lead to one of your skis skidding rather than carving.

The angle with which you tilt your skis relative to the slope. A higher edge angle can hold larger forces and can be achieved at higher speeds.  It's a general indication of your ski performance.

The amount of the turn your edge is engaged. To increase this metric, try to engage your edge earlier in the turn, and hold it throughout the turn.

On average, how similar your edging is between your skis. This is similar to the 'edge similarity' metric, but rather than compare your edging on every turn, this metric compares your average turn. This metric is also reflected in the average turn heatmap. If your left and right skis have similar colours (meaning they show similar average edge angles at each part of the turn), you will have a higher score.

Rotary (a.k.a. steering) movements involve turning parts of the body relative to others. Rotary movements should originate in the feet and legs, while the upper body is stable and quiet (minimal rotary).

How smoothly you move your skis through the turn. A jerky and inconsistent turn will give you a worse score. Smooth skiing is more efficient. To improve this metric focus on linking the initiation, control and completion of the turn into one fluid motion so that they're not a distinct set of phases but rather a continuous process.

Measures how well your skis move together. Try to keep your skis parallel throughout the entire turn and moving as one to improve this score.

Pressure refers to the forces developing on the ski through the turn. Good pressure control is  to extend to and balance on the new outside ski at the beginning of the turn and flex at the end of the turn.

How you build up pressure against the ski.  The turn should be one fluid motion as you load up the ski into the transition of the turn and then release that pressure back down during completion. A jerky application of pressure will reduce this score.

How much pressure you place on the outside ski versus the inside ski. The outside ski (i.e. the ski further out from the turn centre) should have more pressure. A common problem among intermediate skiers is leaning too far into the turn and placing too much pressure on the inside ski.  This will reduce the amount of grip and make you more unstable over bumps and ice.

On average, how similar the application of pressure is between your left and right feet.

Did this answer your question?